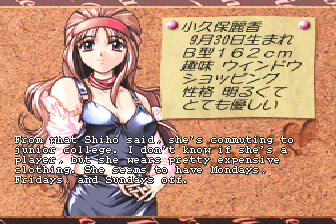 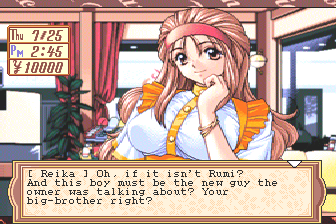 From the back cover:

04-10-2011 I forgot to mention about a month ago someone by the name of Odino posted a fantastic walkthrough for the PC-FX version of the original Welcome to Pia Carrot using our translation. I worked with Odino minimally answering questions and such pervious to the release of the FAQ. This is the same individual who wrote a guide for Hoshi wo Sagashite for the Sega Master System. Thank you very much for all your work on this and for all the great FAQs you've contributed to GameFAQs. The FAQ really cool and you should check it out!

05-19-2009 I recently heard from Aaron Nanto from Pcenginefx.com. He said that he's been following the Pia Carrot translation project and is very glad to hear that it is now complete. He's starting production on episode 8 of PcenginefxTV and is planning on featuring the translation project on the show! If you'd like to be emailed when the episode is released you can subscribe to his youtube channel.

02-07-2009 I'm proud to announce that we are releasing the 1.0 English translation patch for the NEC PC-FX version of Welcome to Pia Carrot today! This patch is a complete English dialog patch including all dialog displayed to the screen, and a large portion of the visual Japanese like the opening screen, character bios etc. The only things not addressed are the FMVs which are still in Japanese.

This patch has not been fully tested but it should be 100% playable. It is a little rough around the edges in a few spots, most notably the extra comics and games you can get in the game, so please keep this in mind. Minor fixes, edits and improvements may be made later but we didn't want that to get in the way of a playable release.

The release includes a custom patcher for Windows that can be used to patch a bin/cue style ISO image. It also includes a super cool music dumper. The included .ppf file can be placed into the main directory for the emulator MagicEngine FX and it will soft-patch so running the patcher is not neccessary. In other cases you'll want to patch the .bin file and then re-burn the disc.

Get your patch at Romhacking.net! (DISCLAIMER: This game is intended to be played by persons over the age of 18. Please abide by the laws regarding material of this type in your region.)

09-13-08 I basically dropped the ball on this and neglected to translate the last block of additional text that was dumped a couple of months ago. Anyway, I finally got up the motivation to finish it and it's been handed over for insertion. That's all for now.

06-30-08 I have a few screenshots to show off new progress. Work is currently being done on the graphical menus, formatting the choice segments, and dumping/translating/reinserting small amounts of leftover text that hasn't been dealt with yet. 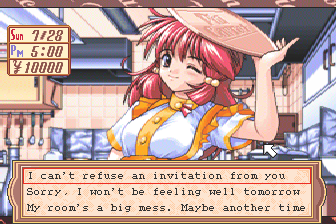 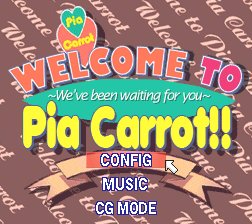 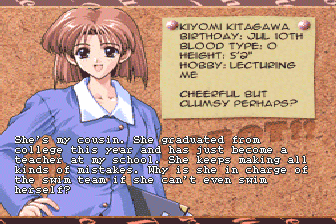 The above screenshots showcase a formatted choice section, the inserted title screen with graphical menu edits, and the character bios with translated graphical text! There is still some work to be done on formatting text and the graphical menus, but things are coming along well.

A new script edit has also been inserted which I think is a solid improvement in terms of localization and polish. I hope any changes from here on out will be minor.

06-11-08 True to his word, David recenlty re-addressed the game crashing issues and found a solution! Work is progressing again on the project and things are going well. Some very interesting developments recently. Stay tuned for more info.

05-29-08 I have yet to mention here that the project has encountered a snag in the form of a game crashing bug. :( I have confidence that David can find a workaround. I've heard from him recenlty and he assured me he will be taking a look at it soon.

01-16-08 I recently got to check out a WIP build of WtPC courtesy of the distinguished Mr. Michel. There are still some technical issues to deal with before more of the script is inserted. The first few days of script are fully playable though and looking quite nice. I got to make a few small edits for some punctuation and a word change or two. Here's hoping it won't be long before more is playable.

11-04-07 I've completed a full play-through/edit of the script! This edit was to look for mistakes in the translation and to edit for wording and punctuation. I played through the game with all 8 girls through thier endings, as well as a "Rumi" play-through where I hit certain texts like talking to your father every day after work and the "doujin-games" that you can play, etc. So things are coming along very well.

Also, there has been some progress that I haven't reported here. David wrote a hack to shrink the font and inserted a chunk of the original script. More recently he's centered the text in the menus and fized some ugly formatting of text in the screens you get when you check the data about the various girls in the game.

06-06-07 It's been about 3 months since my last update, and I'm proud to announce the initial script translation is 100% complete! I'm doing some editing on it right now, but it looks like hacking will still take some time so there is no big rush. I'm really glad to have finally finished. It's been a long 16 months but I was so happy to work on this project so it was a joy to do. In the end, it cannot really live up to my expectations as something that was so full of wonder and mystery at one time, but I don't think anyone who plays it will be dissapoined. I'm truly grateful to have had the opportunity to translate this game after all these years. I hope that others will be able to experience even just a portion of the joy that this game has brought me once this project is finished. 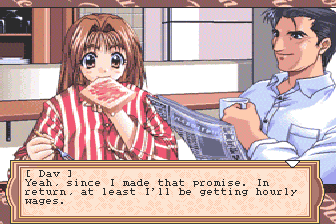 A shot of Dave's test script insert from back in July

03-08-07 I've probably skipped some interim updates here, but I took a week off recently and did a lot of translation work. It basically breaks down like this, over the past 15 days I've translated an additional 12 script blocks beyond where I had gotten up to at that point. This should bring me to somewhere around the 80% mark towards completion of the script translation! I'm currently translating the events of August 21st in the game. The game ends on August 28th if that gives you an idea of the total progress. Granted, there is a lot of wrap-up and 50% or more of the dirty stuff happens near the end, but there is no doubt that the end is in sight.

12-23-06 Just a little more progress on this recently. Should be around the 36-38% mark on the script translation.

9-17-06 Well, I've been working a little more slowly on this project recenlty but things are still progressing. I just finished another two blocks whch offically brings me to the 33.3% mark or 1/3 of the way through the script! :P So much still to go. That is ok. This is a huge, even laughably enormous project that many fan translators in their right mind would not attempt. However D makes a good point that a huge script with character names is better than a smaller script without. There is always the need to be thankful for small blessings. Current rate of progress has me thinking summer next year is a fairly accurate estemate for completion, but one can never know for sure.

7-9-06 I've finished a number of blocks of text for this game recently. The text so far seems to be progressing by day, so with 36 days of your summer vacation that you play, including the prologue, I have about 14% of the text translated now. Many thanks to David Michel for getting rid of all game code in the script dumps and utilizing a text database to automatically insert character names during script dumping so I don't have to be bothered typing them over and over. Due to his going above and beyond I am able to translate much more quickly and efficiently on this project than would have been possible otherwise. Also thanks to Eien ni Hen for helping me out with a few tricky lines and for doing a great job on translating the opening theme song. Hacking-wise, the text routine is still being re-written by David to use a smaller font. Text is also being dumped as it is translated. There is still around 86% of the script left to go. :P There is still a long way to go on this project, but it's truly getting underway now.

Below is a mock-up of how it might look when the text routine is finished and the translated script is inserted. Cool eh? I just like to tease you.

5-24-06 I finished the second of an unknown number of blocks of text for this game. The estimated progress on the script translation is around 5%. So far all the prologue text as well as the text leading up to and including your first day of work is translated. I'm trying to approach this translation in more of a "professional" way; I intend to localize the game language as much as possible so as not to leave in Japanese honorifics and peculiarities that do not translate from one language to another. I'm still trying to be as accurate as possible to the story, so rest assured no liberties are being taken there, but just in terms of the language I'm giving myself leave to take liberties with the script to make it (hopefully) as polished and natural as something would get released by a big studio. Personally, I prefer games with a little bit of Japanese left in, but this is special and I want to take a special approach. I'd like to make a script that not just anime fans would like to play, but that anyone will really enjoy.

First of all, let me say thank you very much for translating a classic dating sim. It's nice to finally be able to play one in English, I've been struggling along with my deteriorating Chinese so far.
- Andrew Chiw

GOOD JOB GUYS. IT WOULD BE GREAT IF YOU CAN TRANSLATE Pia Carrot!! 3: Round Summer AS WELL
-yoshinosakura

I'm really grateful for the translation of Pia Carrot and perhaps I should say congrats for you guys.
- Ken

Thank you, Matt. I was waiting for this sice 2006. It's almost unbelievable that I will be able to play it in english. Thank you sooo much!
-Anon

Thanks a lot for your work. This is giving me some seriously delicious feelings of nostalgia~
-Henduluin

Congratulations on the release. It looks like you guys done a good job on it, from a quick glance.
-GIl Galad

Hey congrats to Matt on translating this while am not a PCFX owner i still find this to quite exciting.
-jboypacman

Well, it's great to know that someone actually translated all the text in a PC-FX game.
-McKnight

Damn, I always thought this was never going to be released. I was given the impression that this game's like True Love. If it is then I'm one happy number-crunching-pervert.
-Guest

In response: Yes it's the same genre but much better than true love( pia carrot has less numbers and a less painfull dating system and is lot more enjoyable) its really a true gem a classic(its even got a short anime clip as a opening and prologe).
-dominus

Anyway, thanks for your hardwork. I'm starting to like this game. Maybe you can translate another pia carrot game? Hehehe :P
-jingjong12