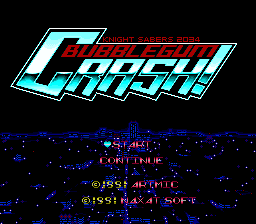 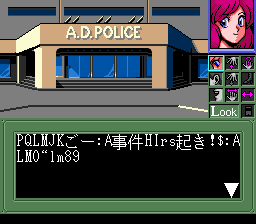 12-28-07 I'm very glad to report that a translation patch for this game was publicly released a few days ago! You can get yours at romhacking.net.

04-13-07 Someone did make it through the final dungeon so I guess the script is pretty much fine. Last I heard Rich is working on a line-break and formatting routine for the text, and fiddling with the credits and such. Release? Who knows. Maybe soon-ish.

12-28-06 The game entered beta testing on the 10th of December. So far it's been played and tested up to the final maze. As far as I know, no one has made it through the maze yet to check the ending but things seem to be working well. A 1.2 version recenlty fixed a couple of bugs with the text.

12-7-06 The very same individual that offered assistance with Lady Sword, come to find out, is also helping out on Bubble Gum Crash. It has a working font routine. I'll say that again, it has a working font routine. Not only that, but it has an inserted script. Yes, you heard right. It's basically in a play testing phase with some small hacking and script editing work left. Pretty dramatic progress, completely out of the blue I might add. I'll keep my fingers crossed but at this point it's looking good. I'm checking my script right now and making edits towards the final version.

(Sometime in '04) This is a project I began "in secret" with David Shadoff after we had made some progress with Maison Ikkoku. We were hoping to have something else to release soon after MI, or possibly before since we were hitting some snags with MI. It got off to a rocky start as there was some back and forth about the table file, but once we got that squared away the dumping of the script and it's translation went fairly smoothly. David was planing to re-write the font routine, to allow the use of 8x16 tiles rather than the current 16x16 so we could fit more letters in each line. I found a nice lookng 8x16 font and inserted it, but David got busy and no further progress has been made that I know of. I'm still hoping that this project will get finished some day.